After going through the data for 19 days, here are my observations.

The male has spent a few nights in the box, which is unusual.  There have also been several comings and goings at night-time, including departures at 3 am (Diamond) and 2 am (Xavier).  I’d love to know if they are doing any hunting at night, but they don’t bring anything back to the box if they are.  They can clearly fly well at night.

Diamond is spending more time in the box during the day than previously.  If the juveniles are becoming more independent, that would back up my theory that it is she that is doing most of the supervision (perhaps because they are not Xavier’s offspring).

Xavier is also frequently in the box, and often stands in the scrape, but has done little preparation during this period, possibly realising that he has a a bit of wait before the next breeding season.    He also brought food into the box a couple of times:  in one instance, I thought he was going to give it to Diamond, who was already there, but cheekily he flew off with it.  Another time, Diamond arrived with prey (possibly a galah, or what was left of it).  Xavier tried to take this off Diamond, but, after a short tug of war, she took off with her prize.   Manners, Xavier!

Courtship behaviour has been regular, at one time, occurring twice within a one hour period.  These bowing displays appear to occur earlier in the season than in the northern hemisphere, although I’ll need to confirm this with the literature – and our previous season’s behaviour.    He usually bows lower than her, which is consistent with the literature and it will be interesting to see whether this changes over the season.

We had a visit from a magpie, who may have been trying to inspect the box (where Xavier was cowering!).  Australian magpies are unlikely to attack peregrines, or use their nest-sites, but are large, feisty birds who terrify children, cyclists and golfers in the breeding season, and I’ve never seen them on the peregrine dinner table here, although it’s not unknown (perhaps unwary juveniles are occasionally taken).   Diamond and the magpie were chasing each other, while Xavier watched on (as is his wont!). 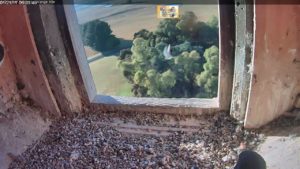 Now I need to have a look at the data Christine has sent me.  I’ve already done Sue’s and she is waiting on more!    What a gift this has been.   I don’t know when I would have found the time to get all these data entered.

Incidentally, I’m pretty sure I saw one of the juveniles (probably female) in their dead roost tree on Friday night, but I couldn’t get close enough to be sure, unfortunately.   Note to self:  remember binoculars, camera, boots and 4wD!  For images of juvenile visit to the box last Friday, see the previous thread.