Despite looking regularly in the usual roost trees, and elsewhere, Gaia has not been seen since the first week.   There is some evidence that she was heard calling a few days after that, but nothing recent.    I have not actually stopped looking for her, and unless one gets a report of injury, or finds a corpse, one cannot categorically state that she has died, but that would seem the most likely outcome.   She is much too young to have set out on her own.

Even Pluto is not really hunting yet, although we have seen him catch a dropped prey a couple of times, once through the webcam and once in the field (sorry, no photo!).  He is a feisty youngster, tormenting his parents (as they all do) for food.  Here is seen interrupting his parents’ bonding ritual yesterday with demands for attention, managing to chase both adults out of the box.  I think he will do well!

Here is our young male, in a calmer pose.

A few prey have been brought in by the parents (mainly Diamond), including the probable rosella caught by Pluto on 27/11.  Here is the clip of that

We’ve also had a mystery prey (actually we have lots of these as much prey is brought in headless, wingless, tail-less and featherless:), but this one was a bit intriguing.  It seems to be a medium sized passerine, with narrow beak, plumage dark in colour with a clear patch of yellow and possibly some white on the flank.   Nothing springs to mind!  I’ve enlisted some local sleuths (Sue and Tiffany) to plumb the depths of their knowledge… 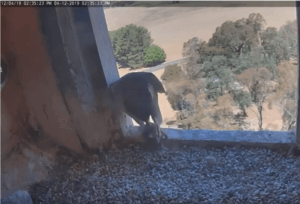 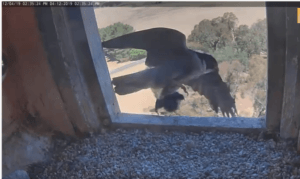 Pluto will continue his training following his parents, who will drop prey to him to hone his flying and catching skills and I expect him to start catching his own prey fairly soon.   Last year the youngsters took cicadas, but these insects come in waves and are unlikely to provide a feast this year.   The parents will gradually loosen ties with Pluto until he is independent.   This is unlikely before another three weeks and could take longer.  According to the literature, once juveniles can catch their own prey, the parents drive them away, but I’ve never observed that.  Our pair seem quite tolerant of youngsters, despite their sometimes appalling, nagging and even aggressive behaviour.

Chitra and I are going out in the field again this evening to watch the youngster.   I prefer to do this when Pluto is in the box (as he has been a lot this last week, resting during the day and even occasionally at night), so I know that, should I find a juvenile, that is Gaia as they are quite hard to tell apart unless they are together.

I have to go to Sydney this weekend, but will be around next week to keep an eye on things.