Apologies for such a long gap in posts.      This was due to a combination of technical problems and an overseas trip.   I saw some lovely birds in France, including a peregrine pair near the Swiss border and visited a raptor display in Alsace, which included some rather badly-behaved owls!

But anyway, I’m back on track and madly trying to catch up.  I’ve lost all data from April, May and most of June, but am currently going through the tapes for late June to now and have reached July 20th, so hope to be up to date by the end of next week.

The good news is that all seems to be on track for another breeding season.  And I’m pretty certain this is the same pair.   In the few weeks that I have studied there has been an increase in the intensity, frequency and duration of courtship behaviour and the birds are visiting the box on a regular, almost hourly basis with Diamond roosting in the box every night.

I have been watching closely for prey bringing activity, which should have started in earnest by now, but so far, I have only seen one starling being brought in to the (empty) box by Bula.

Whether Diamond got her reward, I can’t say.  She herself brought in a morsel (unidentifiable) later, but I noticed that behaviour last year too.

Preparation of the scrape(s) has been somewhat desultory, with just the occasion preparation behaviour from both birds.

There has been a huge amount of rainfall this winter, with considerable flooding.   I don’t know how much this affects the peregrines’ ability to hunt, but I can say that, because of the huge number of wetlands at capacity further inland, the number of waterbirds in the district has dropped dramatically.  I did a two hour survey at a reservoir near Orange this morning and, apart from a nice sighting of some blue-billed ducks (threatened species), the number and diversity of waterfowl was very low. 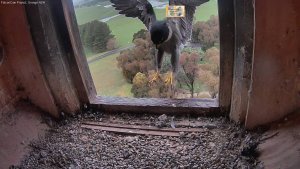 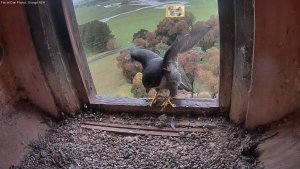 The other good news is that I applied for a new computer via a grant process and that has been successful.  Mine crashed and burned in March and is beyond salvation, so I’m on a borrowed one at present.   Hopefully my new one won’t be too long.

Any comments on activity that I’ve missed while I was away (assuming the cameras have been running at least some of the time) would be most welcome!